I wouldn't say I care much about fashion. I don't give a rats ass about fashion. In fact I think "fashion" is the most ridiculous waste of time anyone has ever bothered to be concerned about.
Or at least that's true when we're talking about "Fashion" in the sense that some things are in fashion (and some things are SO (like totally) out of fashion by a month or something). But in terms of thinking about how I'm going to dress, well I do that, and so does everyone else. Even that guy I know who wears a hawaiian shirt and fedora every single day. Or for that matter, even if you dress in the most unnoteworthy way imaginable, you're still sending a distinct message about who you are.
The way you dress is of course the first impression you make on nearly everyone, it is the most basic form of what is basically social marketing. The guy in the fedora and hawaiian shirt probably thinks it says "laid back and quirky" (though somehow it mainly says he's the go to guy to find a game of dungeons and dragons, or at least that's my own wild assumption).

For the latter part of high school and through college I dressed punkish. Now at 27 I've become suspicious of anyone who is still trying to "live the dream" and dress and act punk (in their late 20s at least. Younger folks have at it!). But first let's go back and examine what it was all about:

A common criticism leveled by the totally-baffled-by-punks is that "they all dress the same!!" It is true that by and large a lot of the punks I knew could pretty consistently by found with their black converse shoes, grey dickies shorts, studded belt, band shirt (usually black), and dickies jacket (usually grey, sometimes dark blue or black) covered in band patches. But the criticism that they all look the same misses the point of why they dress like that. Possibly the primary reason one dresses a certain way is to attract like-minded people -- to instantly recognize in eachother that you're the same kind of person.
People, even people who hate punks, seem to assume that punks are all creative and should apply that creativity to the way they dress (I guess because the whole mess looks "creative" on a whole to the uninitiated) ... but the fact is that I found most punks were not necessarily any more imaginative than any other person. They may perhaps have been more musically inclined, but a lot were just your average people who liked the music and therefore decided to dress the part. And like most normal people, dressing the part meant seeing what everyone else was wearing and immitating it. Even the piercings, tattoos and dyed hair, it was all just what their friends were doing.
Which isn't to say there wasn't ANYTHING more to it and everyone was just a poser. I myself had a large green mohawk for about two years, and there was definitely a lot more to it than just "it's the punk thing to do."
When you have a great big green mohawk, everyone stops and looks at you. It sets you apart from 99% of everyone else people see during the day (unless you're in berkeley). First of all it takes a little guts to put yourself in the spotlight like that, and people recognize that, at least subconsciously, and see you and think "wow they have some guts." Conversely it also makes wanna-be gangsters who hate punks want to beat you up if they catch you alone, so you've got to be prepared for that. Thirdly, people assume you're prepared for that, and I was amused to find big tough guys would get out of my way on the sidewalk.
I think my favourite aspect of it though, was that people would assume they had no idea what I thought about things. Normally, people tend to assume they know what you're thinking, and they assume you agree with them. I don't really like this, and greatly enjoyed the way people would act like they had no idea what I thought about things (and were thus very interested to find out).
The day I shaved off my mohawk and went into the city to interview for a Diplomatic Security job, I first had to get used to people no longer getting out of my way on the sidewalk, and then was saddened to find when I walked past a group of punks they no longer all jumped up to make my acquaintance. I was just another guy in a suit. ):

I never liked the idea of looking like everyone else though. That's why even during my most punkish stages I never owned a pair of converse or dickies shorts (but I did end up with the rest of the outfit I guess).
Other than the punk look though I've always liked to dress in a way that sort of harkens back to sometime between the 18th century and 1850s (or friends joke that my look is "sea captain"). Muttonchops, suspenders, peacoat... I figure if I dress in a way that never is IN style (my century anyway), it'll never be specifically out of style. Dear current trendy guys: you think those bell bottoms from the 70s look funny? Wait till your kids see pictures of you wearing your girl pants!!


Vaguely Related Picture of the Day 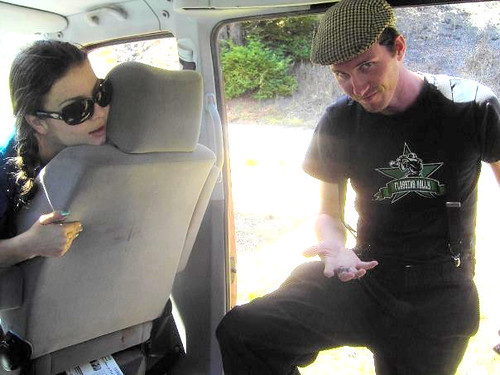 Well after all that I realized I pretty much had to post a picture of myself dressed "typically." I like this picture because it reminds me of clockwork orange.
(this is what's in my hand btw)

(and as an added bonus here's me dressed particularly UN-typically (and fifteen!)
Tags: fashion, project 7
Subscribe