A Practical Guide to Getting Stung in the Face

So I got stung dozen and a half times in the face the other day at work, but that wasn't even the worst part.


I was making the rounds at our largest bee yard, where we have some 75 hives on three sides of a large square. Sometimes bees would start buzzing around me in a way that is either a warning or just means they're gearing up for battle, I'm not sure but I know it's the precursor to trouble. Their buzzing takes a different pitch when they're doing this or in an active attack pattern (same pitch), and it's pretty obvious the bees are flying around ME rather than going about their merry business. When that happens I stand perfectly still. Although they can still tell you're not a statue because they can smell you and are sensitive to specifically the carbon dioxide one exhales, standing perfectly still makes them notice you about 80% less and is usually sufficient to make the concerned bees calm back down.

With the bees, you're good as long as you're good. I have this suspicion that they can sense when you're afraid or agitated, because people who are not me seem to get stung a lot more (for example my boss usually gets himself angry or stressed about one thing or another, and then starts getting stung). But once you get stung once, you're suddenly not good. When a bee stings you it releases an alarm pheromone. So now you're marked. You know in war movies where they mark something for an air strike? Suddenly that's you.
So I was walking through the hives. Sometimes pausing till bees lost interest, then proceeding. And I was good. And then I was not good -- I got a sting. And then another, and another.
Normally this would be time to walk brisky to the truck and put on a veil, but I look up to find that Dave has driven down to the water spigot down the road a bit to go get water for the bees, and the suits are on the truck. By now they're stinging me faster than I can scrape out the stingers.
So I walk briskly to the middle of the yard, since the hives are all on the perimeter, and take off my hat. Batting wildly at bees never works and you just look like an idiot and tire yourself out. HOWEVER, when bees become tangled in your hair, they're relatively stuck and one swift bat can take them out. I wear a khaki coloured hat because my hair is dark brown --the colour of bears--, which tends to upset the bees. But once they're already attacking me, it's better to give them hair to get tangled in then a hat they bounce off of and come right back looking for a fleshy spot to harpoon me. So I take off my hat and immediately have half a dozen struggling in my hair. Swat swat swat, one by one they drop dead at my feet and the buzzing around me subsides.
I then walk to the hives on the opposite side of the yard from where I was and give them the walk through. I do this at a brisk pace, because although these bees aren't looking for something to sting yet, if they catch a whiff of the sting pheromone I'm now covered with they'll be right on it. I am able to give these hives the walk through without incident (I'm just giving them a quick inspection that there's traffic in and out the entrance and no ants on the hive or other obvious problem). Dave's still not back so I walk back to where I left off on the other side, hoping if I give it a fast enough walk-by I can accomplish my mission without getting mauled
No sooner am I near the hives then they're all up in my face again. And not only that, but a bee crawls IN MY EAR. I quickly walk away again somewhat very disconcerted by the bee in my ear (this has only happened to me once before, briefly). It feels a bit like water in your ear -- if the water were scrambling with six tiny legs and buzzing and liable to sting you. Needless to say it was NOT COOL.
I make an extra effort not to clench my teeth or make any expression that might constrict the ear canal. I try tilting my head so that side is towards the ground and jumping up and down, like one would to shake water out of one's ear. No luck. I know that bees usually crawl upwards to get out of places so I tilt my head to the other side, so the bee ear side is upwards, and just pray* that it crawls out. ... fortunately it does. However the memory of the sensation is STILL giving me heeby geebies.

* and by pray I mean just hope urgently

I had finished inspecting all the hives, but Dave was still not back and by now there were bees following me trying to sting me on a regular basis (by which I mean succeeding every few seconds), so I walked around at a brisk pace. Running for your life of course works too, but walking at a brisk pace is usually sufficient to keep the bees attacking you from behind, which means they're mostly getting stuck in your hair and not giving you sausagelip. When Dave returned I tried to look nonchalant about it but it was obvious I had dozens of bees flying angrily around my head. He asked if I was okay and I managed a smile and said yeah ... then grabbed a veil. 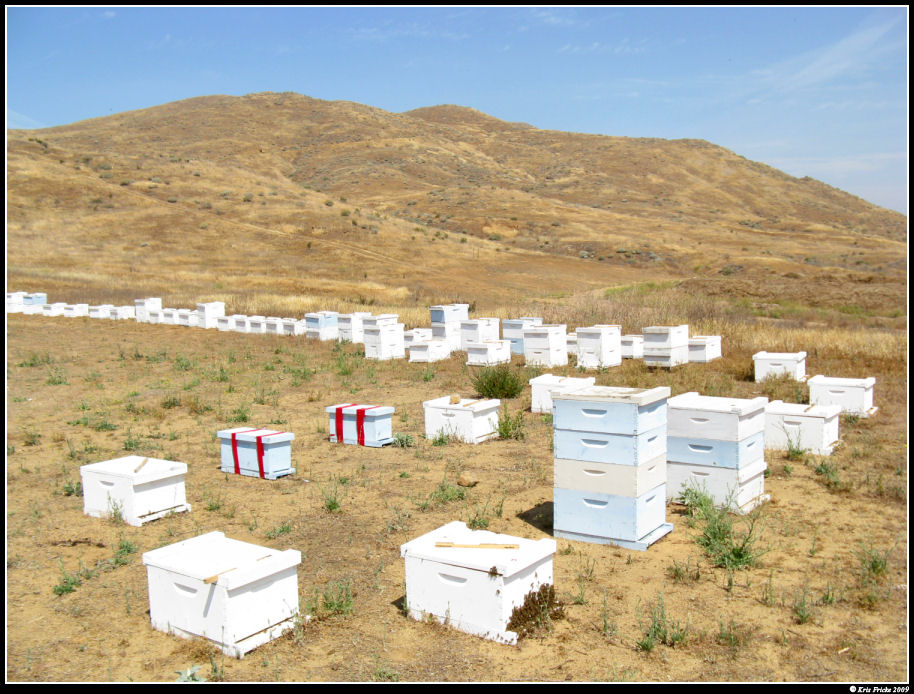 One corner of the aforementioned square perimeter of bees
Tags: beekeeping, project 7
Subscribe