The Orange County Fair, you see, has been going on for the last month or so. I was foolish enough to allow myself to be voluntold I was going to do the scheduling of shifts at the Orange County Beekeepers Association (not to be confused with rival club the Beekeepers Association of Orange County) booth at the fair. We have a nice little booth with lots of posters with interesting information about bees, an observation hive (think ant farm but with bees) and a "beeosk" -- a kiosk covered in bee posters (:
Anyway two people needed to be working it at all times from noon till 11pm Wednesday through Friday, and 10am to 11pm Sat and Sun, for a total of 112 shifts. Now consider that we had only 29 people on the club mailing list, and the overwhelming majority of those avoided working any shifts ... so probably less than half a dozen of us ended up working all of them, the club officers and I (3 of us, minus the good-for-nothing treasurer, don't get me started on him) probably worked half those ourselves. And even with them...

Most club members are retired so it was easy to fill the noon to 5:30 shift, but the evening shifts almost all had to be filled by myself or the officers. So many a day I'd work my normal workday of 7am to 3pm, then barely have time to turnaround and be at the fair 5:30 to 11 (and between getting back to my car and driving home it would be midnight by the time I got home) .. and then repeat the next day. ):
Hence me not posting as much this last month ;)   :P

It's very enjoyable to be talking to people who have a lot of intelligent questions about bees and are clearly interested in what you're saying, and there were definitely people like that ... but most people anything you say is clearly going right over their head and you know they're about to walk out and say "the bumblebees were cool!" or something. And then there were all the dumb questions...

"How do they make honey if they're stuck in there?"
"They come and go through that tube out the back of the tent"
"They don't all just leave?!"
"Why would they? That's their home"

"So their job is to make honey?"
or
"So their job is to serve the queen right?"
It's silly that people think that bees should have a "job" or "purpose." Their purpose is the same as all other organisms: to live and survive; to reproduce. They produce honey to store up food, and the queen lays the eggs, and when they have enough bees and honey stored up the hive reproduces by sending out a swarm to establish a new hive. The worker bees do all the work but that's not the same as "serving the queen" ... people seem to forget that only humans have this peculiar sense of "ownership."

"So they're all guys except for the queen right?"
I really really want to hunt down Jerry Seinfeld and slap him for this one. His "bee movie," which represented itself to actually be informative about bees actually got one of the most basic things totally wrong. Bee populations are 99.999% female!! (there'll maybe be a dozen to up to a few dozen male drones in a colony of 60,000)

"Honey is bee vomit isn't it? That's so gross!"
Yes bees make honey by injesting pollen and nectar and regurgitating it as honey, BUT it doesn't go in their stomach but a special "honey stomach" or "honey gizzard," and thus does not come in contact with gastric juices or partially digested food (which would be honey anyway) or anything else we associate with vomit. There are no germs or bacteria in honey which could be harmful to an adult human (honey should not be given to babies less than one year of age though as certain spores that can effect them can exist in honey) or cooties ... so it really has nothing in common with vomit thank you very much. Now go drink milk and leave me alone.

"So the bees are disappearing right?"
Yes and no. Colony Collapse Disorder has led to an average of 30% of hives in America being lost over winter, and specifically the bees seem to "disappear" (dead bees not present), but a bee population can more than double in spring, more than making up for the loss and a recent survey showed there were in fact more hives now in operation than before this "disappearance." I think it all stems from a misunderstanding of the word "disappearing."

"But I'm always finding dead bees in front of my house!" (usually said in a "no you're a crackpot, I know they ARE disappearing!" way)
You know what you need in order to regularly find dead bees in front of your house? A steady supply of live bees. In an average colony 1200 bees are born every day. That means 1200 are dying every day 47.7 days later.
And besides, dead bees aren't disappeared bees, genius.

"You know Albert Einstein said if bees disappeared all humans would be gone within three years"
Fact: honeybees aren't native to the Americas
Fact: people lived in the Americas before Europeans brought what the indians called "white man's flies"
So you can suck it Eistein. Though agriculture would produce a lot less (other things pollinate, but can't be cultivated en masse like bees can, or you can do what China does since they accidentally killed all their bees with pesticides and pollinate by hand -- good for employment but surely drives the price way up)

And about a million questions about the queen.

The only questions that really stumped me is little kids kept asking me where they came from .. do I have to explain "the birds and the bees" to these kids?? I tried making an analogy to a farm but they looked unimpressed. I should have sent them over to ask the people manning the nearby piglet pen. 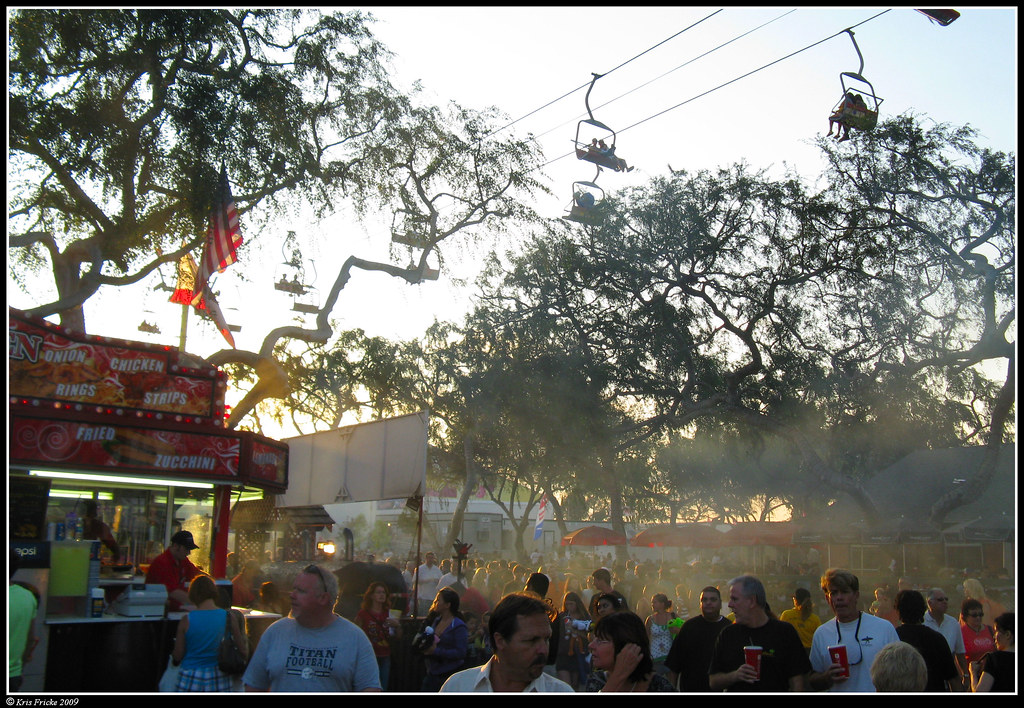 Photoessay: The Fair (conclusion: it's about giant hot dogs)