Notwithstanding that next week I'm leaving the country, whereupon I'll spend the following month traveling through five different countries, and notwithstanding then after only two weeks back here I plan to go out to sea for several months after that, I still intend to give

therealljidol the best shot I can this season. :D
And if I can do that, you do not have an excuse. :D :D


I'm not sure why I did LJ Idol in the first place, being as the thought of most competitions on LJ fill me with loathing and disdain for the vanity of it all. I think it's because from the start I saw that LJ Idol was so big and strung out that it is more about the journey than the end. It's not one of those small communities of people patting eachother on the back and laughing at outsiders, but its not filled with gratuitous amounts of unwarranted warm fuzzies either. It is, in fact, the perfect balance of good sporting LJing. Its something to do to challenge yourself to blog the best you can, and make a lot of friends along the way.

...though I still think the "greenroom" is a dismal quagmire to be by and large avoided until the population of contestants gets down to 50 or so.


So I strongly encourage you to jump into the mix. Don't stress about it being "a competition" and don't even plan to degrade yourself by asking your f-list to vote (though if you ARE going to be competitive about it don't be too proud to -- by the time I was eliminated last year most people still in were asking their f-list to vote for them multiple times a day)


Also, of say the six people I really got to know in Idol last season, four of them got laid as a direct result of Idol, and the other two were already married. ;)


And here is a promotional poster the delightful miss

whirled made for me: 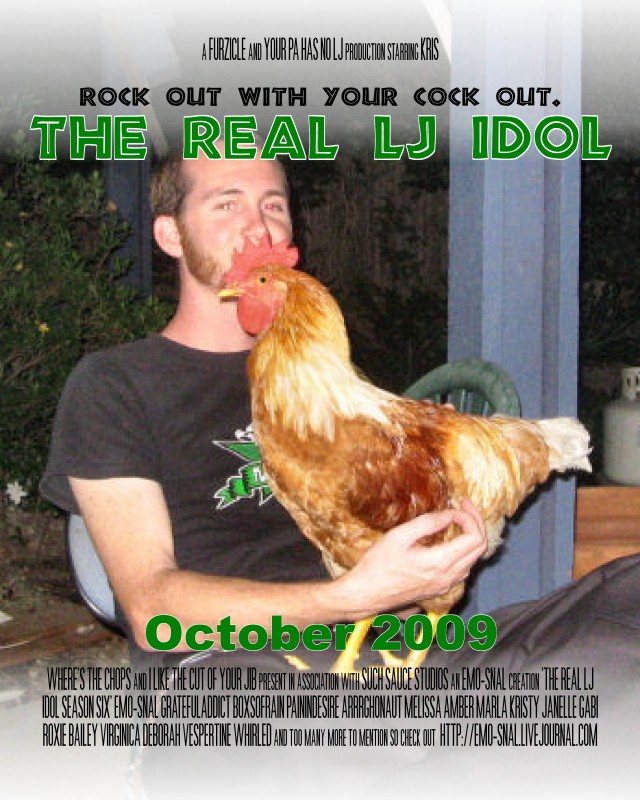