It all began on a lovely nice day in Dana Point Harbour.
Another volunteer and I rowed one of the dingies over to the tallship Spirit of Dana Point, where it would be hoisted aboard ... and nearly lost later in the storm. I noted that the first mate not only had muttonchops and combat boots like me (and we'd later be the only ones with dry feet), he even had the same "castro hat" as me (though it would be lost in the storm). Also while we prepared to get underway a large bird of prey perched atop the mast very very narrowly missed crapping on him.

2009-10-03 - 12:00
We set out from the harbour around noon. Hoisted the sails (though one would later come down when a critical line snapped in the storm). With 11 crewmembers, we were divided into three watches of three people each to stand watch for three hours at a time (Plus the captain and cook). On each watch one person would man the helm, one would be on bow watch, and one would.. keep them company (and they'd rotate between these positions every hour or half hour) ... or at least until the storm became too fierce for it to be safe to stand on bow watch.
Additionally the ship's log was to be updated once an hour ... until it was later lost in the storm.

2009-10-03 - 15:00
I stood watch from 15:00 to 18:00. Had the helm for about half that time. Now steering a ship, if you've never tried it, is a lot like driving on ice. Which of course, makes sense. You try to turn and by the time the boat starts to respond you need to start turning the other way to straighten it out. It's all sliding, all the time. But from all the compliments I got from the captain(s) either (A) I'm a natural or (B) they just pour on the flattery on new folks.
Dinner was delicious (burritos). So far all my tallship adventures have been marked by delicious food. Traditionally around dinner time everyone stands a shortened watch (the so called "dog watch") so I was on watch again 8-9. I stood bow watch during this time, which wasn't much trouble considering I'd hung out up there with the previous two dogwatch bow watchers. By now it was dark and the full (or mostly so) moon was illuminating the sea beautifully.
Immediately after watch I went to bed due to my next watch being in only six hours (03:00 am). It was actually warm enough that I flopped on my bunk and went straight to sleep without bedding or a sleeping bag. 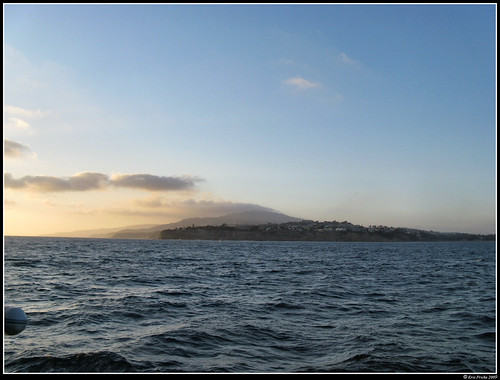 2009-10-04 - 03:00
I wake up in a red-lit room (apparently they use red light so your eyes don't have as much trouble adjusting when you go outside?) to someone telling me I'm on in ten minutes. Stumble out of bed and try to put my coat on as the room wildly pitches back and forth. Felt like I was in a submarine movie.
Come on deck and stumble back to the quarterdeck where the other two members of my watch already were. Was informed we weren't keeping a bow watch "because they might get swept off in this weather and we would never know."
So we took turns at the helm with the other two sitting nearby, all keeping eachother company and awake. On the radio a Coast Guard advisory is playing on repeat every few minutes, advising that gale conditions are in effect and all but the most experienced mariners were strongly advised to stay ashore.
Had kind-of wanted to stay up for sunrise but by the time my watch was over at 06:00 I was tired, and tired of being sprayed, and my arms hurt from wrestling the helm, so I went back to bed.


2009-10-04 - 09:30
This time I slept with my coat over me. Awoke wetter than I went to bed! Just my lower legs though -- apparently my bunk was under a drip over thataway or something. Got up around 09:00 to a wildly rocking ship. Climbed up on deck and proceeded to the quarterdeck, where most of the crew was clinging. Sun was shining but the seas were very rough (15 feet?) and winds were certifiably gale force.
We were at the time about seven nautical miles outside Channel Islands harbour in Oxnard, CA. Way behind where we should have been. Presently we decided to try to make for the nearby harbour instead of Santa Barbara ... but we'd spend all day even trying to get to this location. 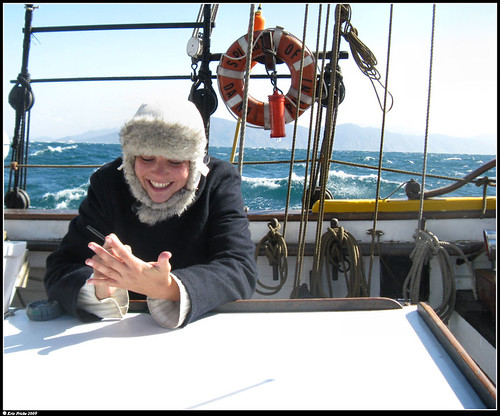 2009-10-04 - 13:00
The log had already blown away at this point. I believe they tried to start a new one and then THAT blew away. I suppose I was technically on watch from 12-3 but we were all already on deck and the one manned position, the helm, was being operated by the most captain(s) (we had more than one licensed captain aboard).
Waves were regularly coming over the front of the ship, and a fair bit of spray was showering us in the back.
At one point, my mum (who was also on the trip), who had been sitting on this box made some comment about getting too much wind and moved. Seconds later a wave fully crashed over the side there completely submerging several of us. Yes, we didn't get splashed, we got submerged. Mum's timing was amazing though, it may very well have saved her life.
Someone else toppled on the deck at one point and hit his head, probably needed stitches later. I was sent flying once when a wave hit while I was trying to traverse the deck, and went spinning across the deck on my back without injury.
We had some sails up to stabilize us (we were going into the wind so they weren't much use), but one of the lines broke on one of the foresails ("the outhaul for the spanker"). The experienced crewmembers then had to go out on the bowsprit and take down and furl the sail. We brought the ship to a stop so as not to shove them under water but they still got a fair good bit wet out there.
Later we had to stop again to reattach the dingy, as one of the lines holding it on had broken.
And then while I was sitting there some small metal object came hurtling down from the mast and bounced off the deck right beside me. I'm told it was part of a light up at the top. We added it to the growing pile of things that had broken off the boat.
Two of the guys who were ostensibly regular sea dogs barely showed their faces on deck at all, all day long. They both later remarked with (feigned?) chipper surprise that they had slept all day ... I'm.. very suspicious. 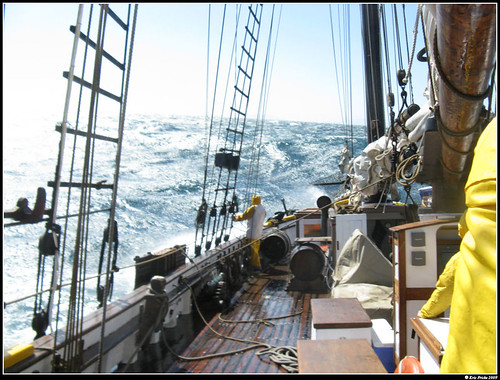 2009-10-04 - 19:30
Someone wakes me up and tells me I'm on duty in 15. This doesn't really make sense to me by my calculations of watch but whatever. I climb out of my bunk to find the room completely topsy turvy -- boxes, bags, stuff of all kinds is all just strewn about. I comment on the mess and the person who woke me up comments "you should see the REST of the ship!"
I manage to get my coat on, a simple operation under normal circumstances, I had to pause at least three times as the room was sent violently lurching in one direction or another. Climb up on deck and report for duty. We've givin up on Channel Islands (after making it within 3 miles -- that's four miles of travel all day) and are now backtracking to a cove off Malibu. Once again we're sailing by moonlight now. Also we're going the same direction as the waves, which nets us a 7 knot speed instead of barely 1, and also makes for less violent clashes with waves (though this way the whole ship basically surfed a wave or two).
Arrive at the cove around 23:00 (keep in mind we were supposed to be done with our journey entirely around 12:00 -- I'd expected to be HOME by Sunday evening not hoping maybe to set foot on land the NEXT day.
Cove was very calm. As it had been too wild to use the galley all day, we all raided the cup o noodles supply in the galley as soon as the ship was anchored in. Everyone was assigned 35 minutes of anchor watch at some point in the night up until 4am, when we'd be weighing anchor and making a second attempt up the coast.
Two hours of sleep later my watch was.. completely uneventful.


2009-10-05 - 09:00
Monday I awoke around 09:00 ... and the ship was in pretty much the exact same place it had been when I woke up the previous morning! Sea was much much better though and a hot breakfast of oatmeal was soon served, much to everyone's delight.
Had the helm when we finally reached Channel Islands around 10:20. We had to be escorted in by harbour patrol because the tallship Exy Johnson had run aground there some months ago and now it's apparently their policy that all tallships must be escorted in.
Myself and three others disembarked at the fuel depot around 11:00. I believe the rest of their journey was uneventful.